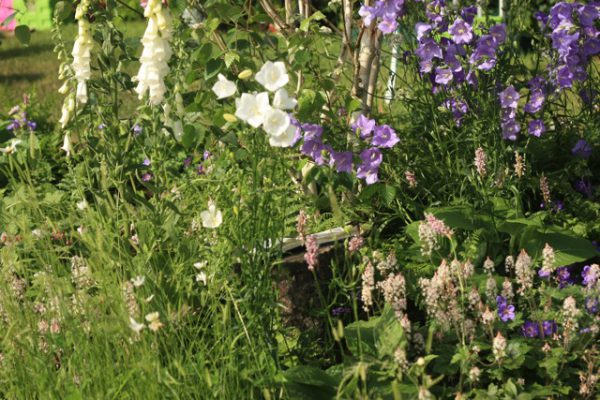 Chris is thrilled to announce that he is now the proud owner of an RHS Gold Medal for our winning entry at BBC Gardener’s World Live!

The garden design was a collaboration with Tony Harding of Seasoned Garden Designs, and was inspired by the works of our war poets whose words capture so vividly the horror of war. I had particularly wanted to do a garden along this theme to commemorate the Centenary of WW1, and this category offered the perfect opportunity to bring the concept to life. 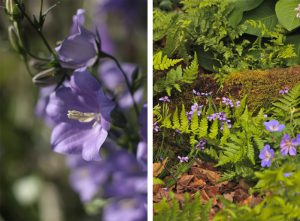 The idea was inspired by a poem by John Williams Streets entitled ‘Matthew Copse’. Streets was an officer who found himself fighting near some woodland in the Somme, and he describes how this shattered copse would once again be filled with life, love and hope.

So nature flourishes amid decay,
Defiant of the fate that laid her low;
So Man in triumph scorning Death below
Visions the springtide of a purer day:

Dreams of the day when rampant there will rise
The flowers of Truth and Freedom from the blood
Of noble youth who died: when there will bud
The flower of Love from human sacrifice.

For our garden, we imagined our soldier on his way to war and finding a shady spot on the edge of the woods with a wildflower meadow before him. A tree stump provides his final resting spot before continuing his march into battle. Here he sits and writes his final poem. The brief was very emotive, and it is with some cruel satisfaction that I can say that it made most of the ladies in the RHS office cry! Armed with this knowledge we knew Poet’s Last Rest had a powerful story to tell, and so it was now down to the integrity of the planting and the execution to bring the idea to life. Here Tony came into his own, being a hugely experienced plantsman, and the quality of our plants was exceptional. 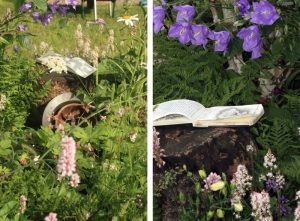 Central to our design was a beautiful multi-stemmed silver birch (Betula jacquemontii) surrounded by swathes of Geranium ‘Rozanne’ and G. ‘Spessart, Tiarella ‘Crow Feather’, Campanula persicifolia, foxgloves, Persicaria bistorta ‘Superba’, Sesily libanotis (Moon Carrot – my favourite in the end) plus masses of Dryopteris filix mas and shuttlecock ferns. This lush scheme was underplanted with Vinca minor which was draped across our little woodland path, and Ajuga reptans ‘Valfredda’ – commonly known as ‘Bugle’! Tiny punctuations of Sisyrinchium ‘E.K. Balls’ erupted from beneath logs like tiny grenades of purple and yellow and looked fantastic. To the front was a meadow donated by www.meadowmat.co.uk. It was filled with poppies, yet none flowered until the morning of judging, when one tiny poppy emerged to represent the one fallen soldier. It couldn’t have been more poignant or perfectly timed!

To add an element of theatre, an army helmet was propped against the stump, upon which was placed the soldier’s notebook and pencil complete with journal entries, pencil drawings and some terrible attempts at poetry by yours truly! It helped flesh out the idea and visitors and judges alike commented on just how touching they found the scene. 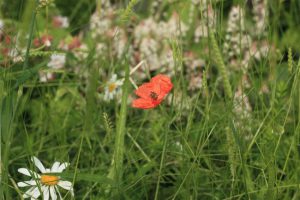 Our garden was awarded full marks and a prestigious gold medal, which alone was just amazing. To then win best in show was a totally awesome feeling, and is one of the proudest days of my life. It was the attention to detail in both the quality of the plants, and the finishing touches that impressed the judges the most, and how we had made such an emotive brief come to life in such a small space.

Congratulations to Tony. I know how much this meant to him. Thanks to Caroline Wilcox and Pete Luke for the props and Richard and Amanda Knox for lending me an officers uniform to dress up in! Thanks to my family for putting up with me spending so much devoted to this, and to my amazing fellow garden designers who are all just brilliantly talented. You made my week at GWL simply fantastic. Here’s to future medals!

Chris Cooper-Hayes
https://www.cooper-hayes.co.uk
Chris Cooper-Hayes is an award-winning garden designer based in the Midlands. He creates innovative and inspirational gardens, including eco-gardens and contemporary outdoor spaces, always keeping nature firmly at the very heart of every project he undertakes.
Previous Post Lilly’s getting into in the garden! Next Post It’s all clear for Lilly!